The Dr. Bert Spilker Key Collection, numbering over 450 keys, now has a permanent home at the General Society of Mechanics and Tradesmen at the John M. Mossman Lock Collection. The General Society is indebted to Dr. Spilker for his generosity and is proud to be the new custodian of this magnificent collection.

This exquisite assortment of keys date from Roman times (700 BC to 400 AD)  to the 20th Century, with the bulk of the collection dating from the 15th to the 19th Century. It also includes keys from the Celtic period (late BC), Viking period (6th to 11th  Century)  and Gothic (13th  Century)  periods of history. The collection includes extraordinary keys from around the world, with a particular focus on Europe, with keys from Germany, France, Austria, Portugal, Spain, Switzerland, England, Holland and Italy.

National lock and key expert, as well as being a physician and scientist, Dr. Bert Spilker assembled  his noted collection over a span of 35 years. Among his accomplishments as a serious collector, Dr. Spilker served as the guest curator for the Smithsonian Institution-sponsored exhibition entitled “Keys and Locks” at the Cooper Hewitt Museum in 1987. Hundreds of articles on the Spilker Collection have appeared in publications in the U.S. and elsewhere, including these articles Keys That Open The Locks to Worlds of the Past And to Distant Cultures  and Keys that Open Doors to the Past in The New York Times. Additional articles include The New York Daily News Magazine and The Wall Street Journal. 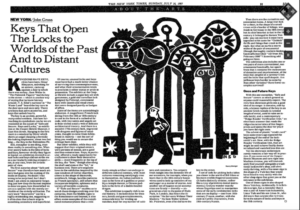 For thousands of years, keys and locks have provided humans with security and privacy. Although locks and keys are believed to have developed in the middle East, by the Roman period keys had become an important possession for many people. The Dr. Bert Spilker Key Collection provides an overview of keys and locks from the ancient world to the present. Although the form and appearance of keys and locks has changed radically over the centuries, security devices continue to play an indispensable role in daily life. The history of craftsmanship and design in partnership with technology and innovation is clearly recorded in these essential tools of survival.

The General Society invites you to visit and gaze upon the stunning beauty of these extremely rare items from a time gone by. At the moment viewing the collection is by appointment only, Monday to Friday afternoons. To make an appointment, please email ktaylor@generalsociety.org