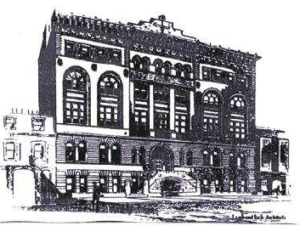 Among the many resplendent flags unfurling in the midtown, Manhattan breeze is the gold and royal blue emblem of the General Society of Mechanics and Tradesmen. Housed within the General Society’s oak and marble walls, beneath the subdued glow of polished antique lamps, is New York City’s oldest technical school – the Mechanics Institute.

In 1820, The General Society opened one of the city’s first free schools. There was no public school system in New York at the time, and only two other free schools were to be found in the entire city. Children of members were admitted free of charge, and a small fee was required from all others. (Later that same year the Society added a separate school for girls.)

In 1858, after the New York City public school system had been sufficiently developed and daytime instruction became widely available, The General Society elected to convert its school into a Mechanics Institute that would provide training to those citizens whose work obligations prevented their pursuit of formal technical education.

Mechanics Institutes were educational establishments formed to provide adult education, particularly in technical subjects, to working men and, later, women. As such, they were often funded by local industrialists on the grounds that they would ultimately benefit from having more knowledgeable and skilled employees. The Mechanics Institutes also served as “libraries” for the adult working class and provided them with alternative pastimes to gambling and drinking in pubs.

The first mechanics’ institute was incorporated in Glasgow in November 1823, founded on work begun at the turn of the previous century by George Birkbeck. Through the auspices of the Andersonian University, Birkbeck first offered free lectures on arts, science, and technical subjects in 1800.

Our Mechanics Institute’s focus has been to provide “privately-endowed free evening instruction to respectable young men and women to improve themselves in their daily vocations,” and to assist those who were obliged to become wage earners before completing their desired education.

Many of the Institute’s alumni, such as Andrew H. Dykes of Dykes Lumber, Harry S. Weller of the L.J. Wing Manufacturing Co., and Andrew G. Hagstrom, of the Hagstrom Map Company, have become renowned and respected members of industry and society.

Between 1899 and 1908, Andrew Carnegie, himself a member, contributed over half a million dollars to the General Society. Generous gifts came in from other members as well, and by 1913 enrollment at Mechanics Institute had reached 2300.

Today, The General Society is located at 20 West 44th Street and is listed on the National Register of Historic Places. Its school, the Mechanics Institute, is the oldest privately-endowed, tuition-free, technical school in NYC, with thousands of alumni.